What season is it, anyway?

A WEEK OF TWO HALVES

Winter is here in Banff, but if you’d have been here last weekend you wouldn’t have expected it!

I finished my hiking season as I started, off on a new hiking adventure with my buddies. November 11th! This time last year we were enjoying a 40cm powder day at Lake Louise, and this year not a speck to be seen and the hill isn’t open yet! (Note: Sunshine Village has opened, but there’s a long season ahead to look forward to, I like my skis, and I was keen to hike another mountain before the “fall” truly turned into winter). Lady Macdonald sits directly across the valley from my new house, and I’ve wanted to climb it since I came to the valley 7 years ago. It just goes to show how much there is to do here that it’s taken this long to knock it off the list!

I woke up early, packed my gear and biked across the valley to meet my partners coming in from Banff. Due to a slight miscommunication I had time to nip into the Trailhead cafe and grab second breakfast (2-breakfast days are the BEST days!) We set off up the flood-widened river and soon turned off into the cool forest. The path rose up sharply beneath our feet, and I marched ahead enjoying the steep climb. Before too long the gaps in the trees widened and we were able to glimpse the houses of Canmore further below us. Forest turned to alpine meadow and boulder fields, and we picked our way through and around the boulders using the innukshuks and picking the path most trodden. Suddenly, we turned a corner and were met with a wicked cold and ferocious wind, reminding us that actually, yes, it was November and although there was no snow on the ground it wasn’t far away. Fortunately, the ridge line we followed up to the heli pad sheltered us from the worst of the wind and, 2 and a half hours after we set out, we reached our first goal. 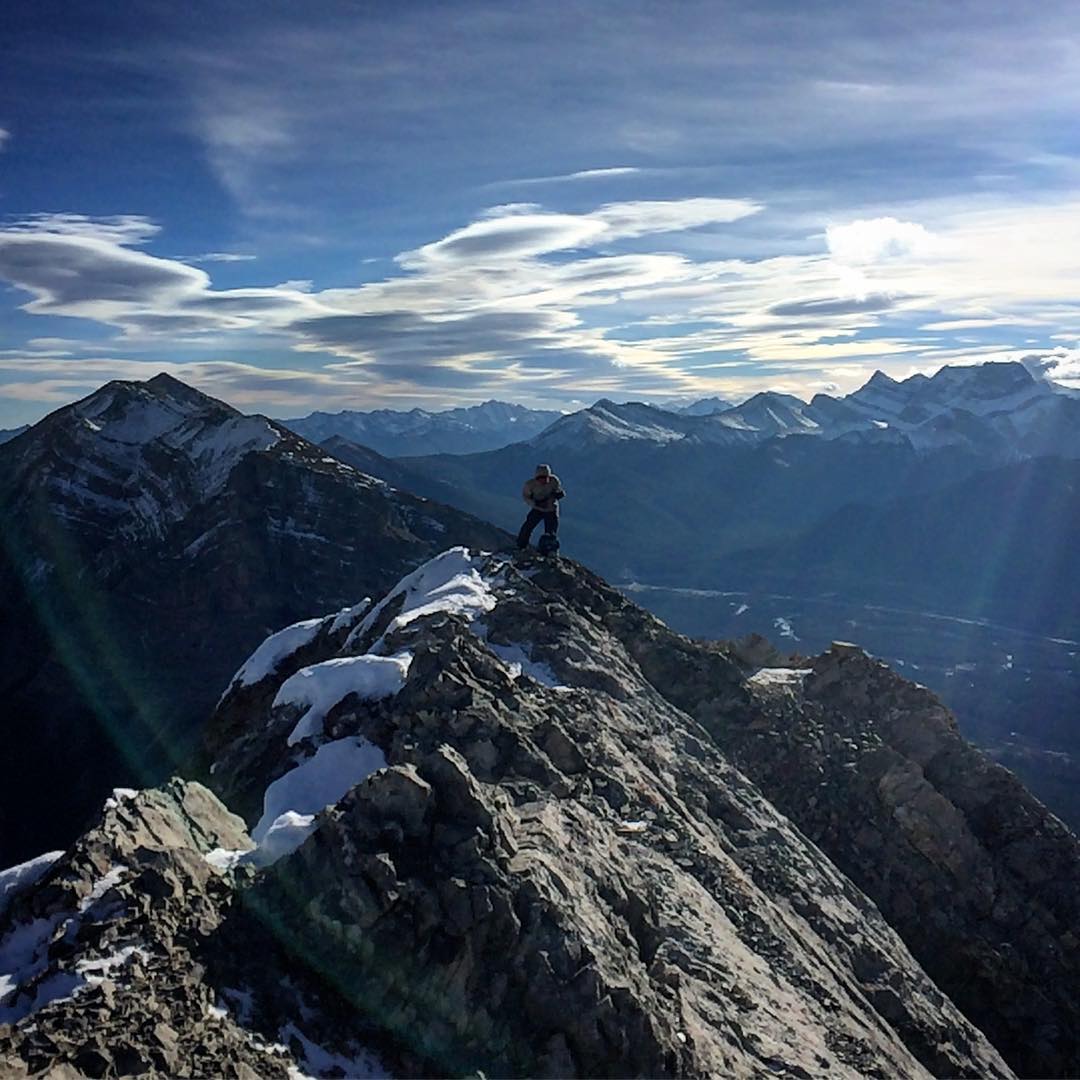 Just behind the heli pad a sheltered bowl has either naturally formed or gradually been constructed over the years. We hid in here, sitting on the flattest rocks we could find and refuelling before the final ascent. It had been a while since I tackled any scree, but it still only took about 20 minutes to scrabble and grasp our way to the top! As with many peaks in the rockies, the summit was a knife edge giving way to a long, steep fall on the other side. It’s worth warning people new to the area to take it easy at the top as it’s vertigo-inducing even when familiar! Pausing to take a look at the magnificent vistas around us, we turned our attention (with a little trepidation in my mind) to the precipitous ridge to our left. The summit lay on the other side, a “difficult” scramble over. I was nervous, I’m always a bit nervous with exposure. It’s a mental exercise; there is no reason to fall, but if you do it’s definitely going to hurt. You have to block out the noise (and the wind) and focus exclusively on what you are doing (and hope you don’t come across anyone coming in the other direction!). Taking it slowly, and mostly on all 4’s to minimise wind exposure, we crept along the ridge to the false summit, and then decided that was good for the day with the wind gusts.

Edging our way back along the ridge, the worst happened and we encountered another couple coming towards us! Quickly assessing the best place to stop, we found a small rocky outcrop and limpet-ed ourselves there allowing the couple to pass. To my astonishment they strode across without any regard for the precipice that fell on either side of them. We made our way back to the scree slope … at one stage I caught my footing in my opposing foot trouser leg which made my stomach leap up into my throat as I lost my balance! It’s moments like this which give weight to my earlier trepidation: sometimes I can be incredibly clumsy.

Scree skiing is one of my favourite pasttimes! Sadly, Lady Mac has too many ridges and insufficient scree to be entered into my top 5 (Yamnuska: you’re still sitting pretty on the top spot!) I far prefer sliding down mountains than walking – it’s a little easier on the knees. Following 20 minutes of fun slipping and scrabbling down, we were back at the heli pad and ready for the rest of the descent. I am so out of practise at walking down hill! By halfway my quads were screaming at me and by the time we finally reached the flooded creek bed I was hobbling so badly. I borrowed a pole for the last part to try and alleviate some of the pressure from my legs, and I should probably have done that a lot earlier. As we were completing our final steps towards the car I realised it was beginning to get dark. Although it did not feel much like winter, the days were definitely drawing in. A cup of tea was in order, so I headed home.

Two days later, the temperature went through the floor and the blizzard descended. At last! Now I can get excited for winter, now that Banff has transformed into it’s winter wonderland state. And what a transformation! 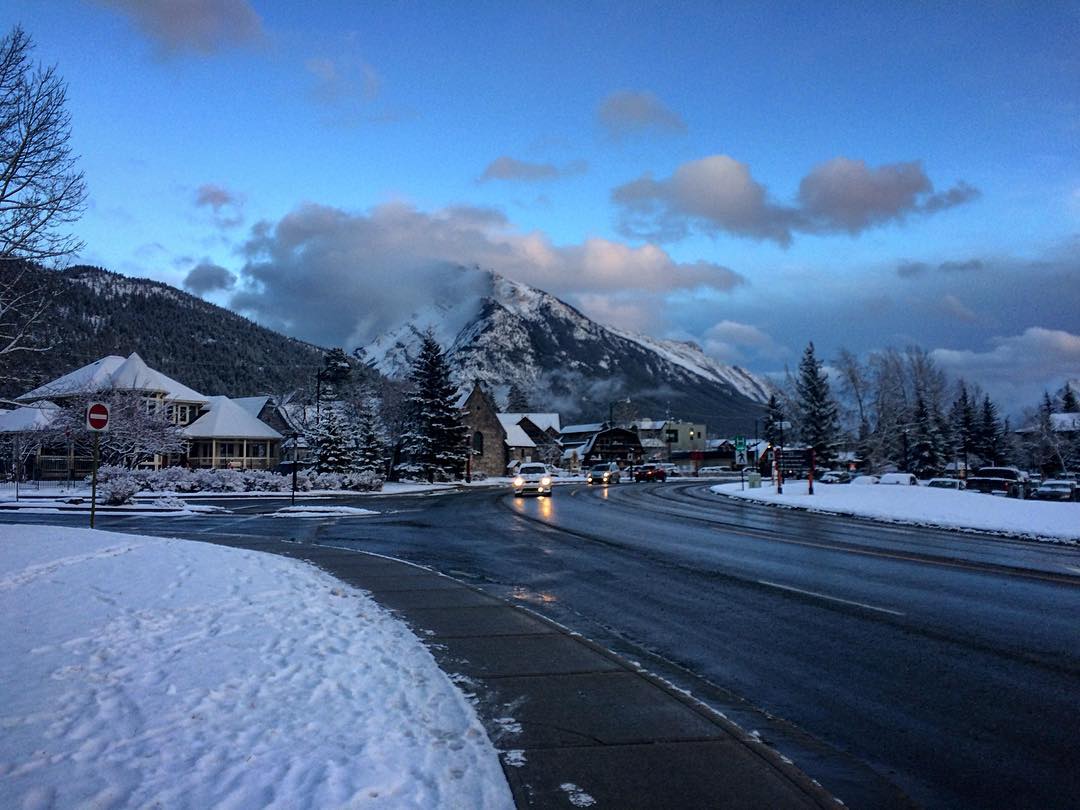