It’s been a fun and busy couple of weeks in Banff – I missed last week’s #150for150 as I was away in Assinniboine.

For my birthday this year some friends and colleagues bought me a flight in to Assinniboine Lodge, which is somewhere that has been on my Banff Bucket List since I arrived 8 years ago!  I haven’t been in a helicopter since I was about 14, so I was so so excited to see the Rockies from a new vantage point!  So, on Friday morning, 7 of us convened at the heli pad at Mount Shark to embark on what can safely be described as a trip of a lifetime.  The helicopters seat 6 people, so we were split into different groups which meant that a few of us (myself included) got to ride shotgun and enjoy spectacular views from the front seat!  Thanks to Alpine Helicopters for a great experience! 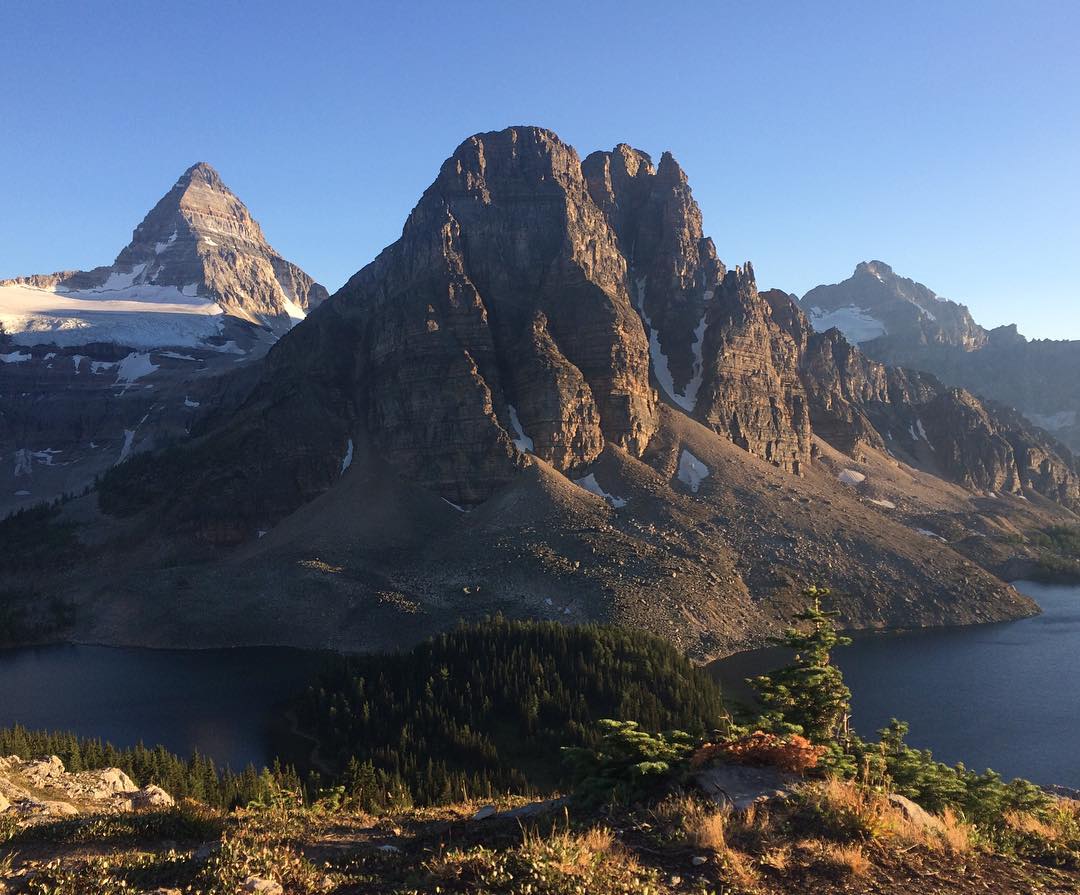 The Rockies is littered with iconic views, some of which have even featured on Canadian bank notes!  One that I have seen on postcard stands around town since I first moved here, and allegedly provided the inspiration for the Panorama production company logo, is Sunburst peak in Assinniboine provincial park.  I have heard so many good things about Assinniboine over the years that it quickly became top of my bucket list, and I’m so happy I was able to get there this year.  We hiked up the Niblet at sunset to get this amazing shot (and then hiked back to the tent in the dark!)

Situated some 30km south of Canmore, nestled against Kananaskis Country which I have often explored, lies Assinniboine Provincial Park.  Mount Assinniboine is the highest peak in the area, and one I shall some day stand on top of.  This past weekend was not the day.  I actually took a significant chunk out of my heel 2 days before flying in to Assinniboine which made hiking somewhat painful and difficult.  I couldn’t manage most of the objectives I wanted to, but I spent many hours staring up at this iconic peak planning my return journey. 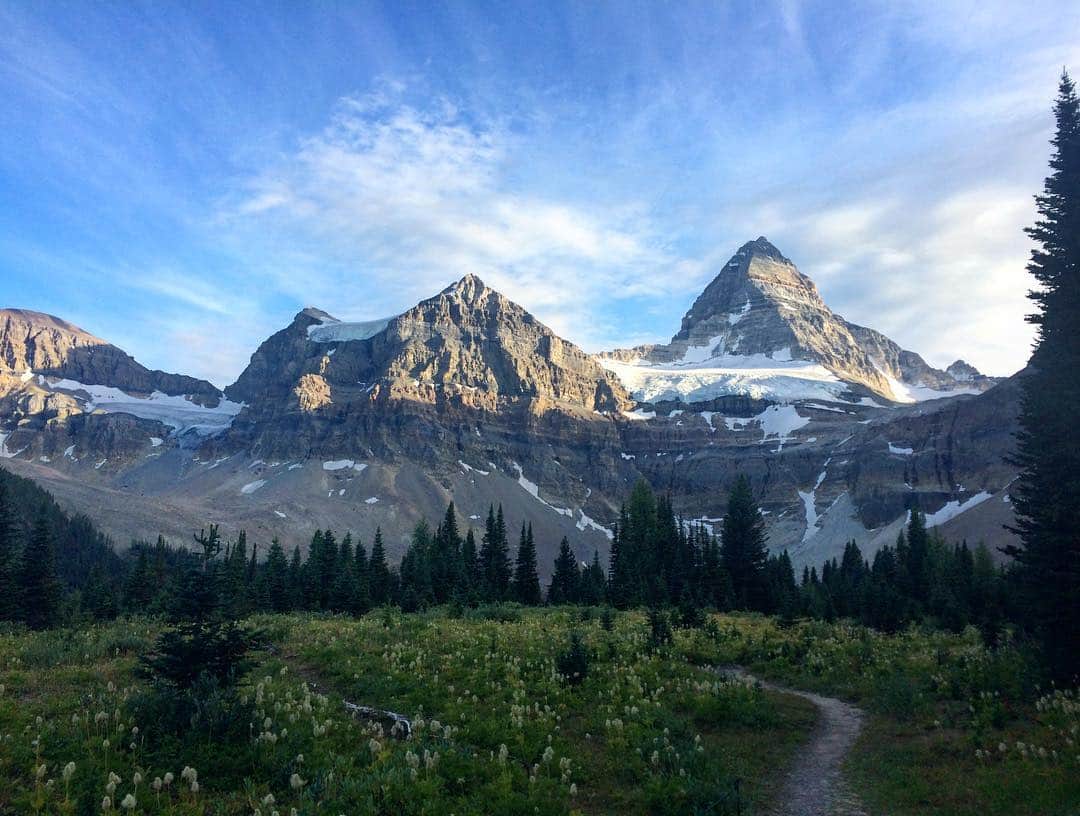 I have booked SO MANY of these for clients, and yet never experienced the thrill of the Rockies from the air.  This all changed this weekend when I went on not one, but TWO helicopter flights!  I spend most of the trip gazing around me with a ridiculous grin on my face, but I did manage to get some footage on the way out.  Simply the BEST way to see the rockies… go fly.

I’ve always identified strongly with the strong, female explorers who left their name and legacy in these areas.  Lizzie Rummel, Mary Schaefer, Elizabeth Parker… these names are ones I seek out and read about as much as I can.  At Yoho Pass I came across this sign writing about how Elizabeth Parker, one of the founders of the Alpine Club of Canada, hosted it’s first camp at that site way back in 1906!  There was no Goretex, lightweight insulation layers or sturdy but lightweight boots around then. They would have had long, woollen skirts, heavy leather boots and the belief that women were the weaker sex to deal with every time they ventured out.  I have so much admiration and respect for these pioneering ladies, and will probably write a lot more on them in the years to come. 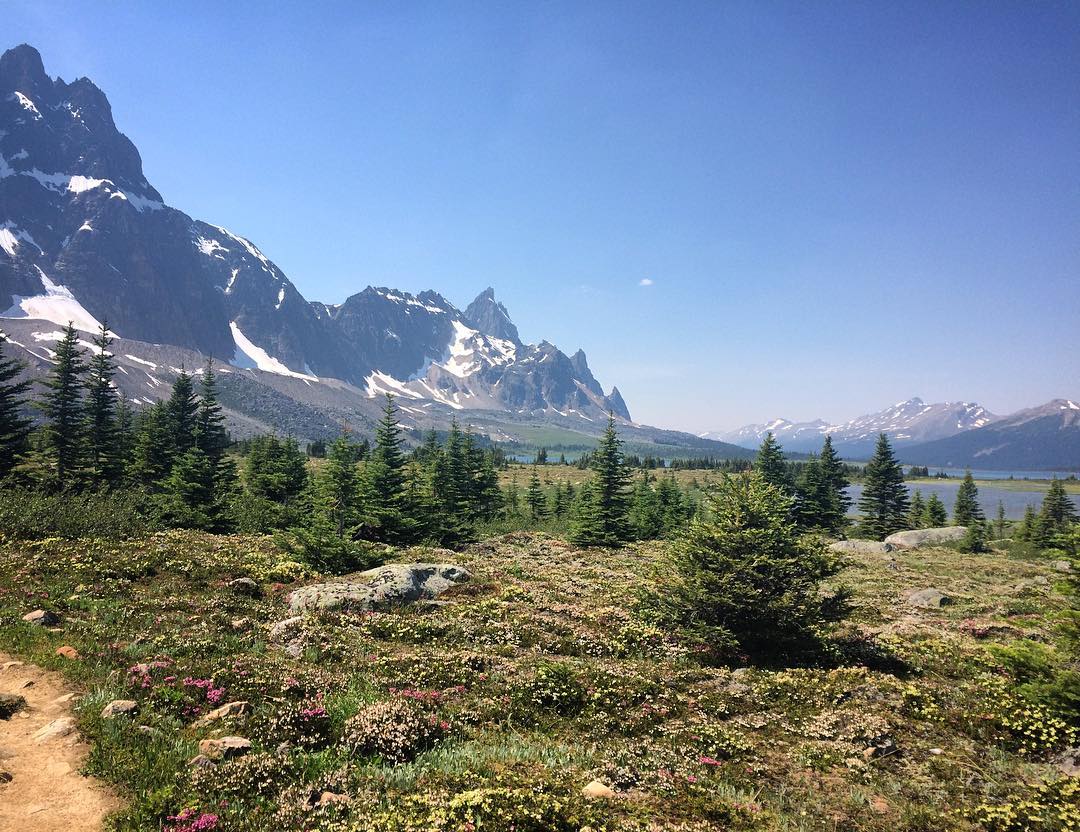 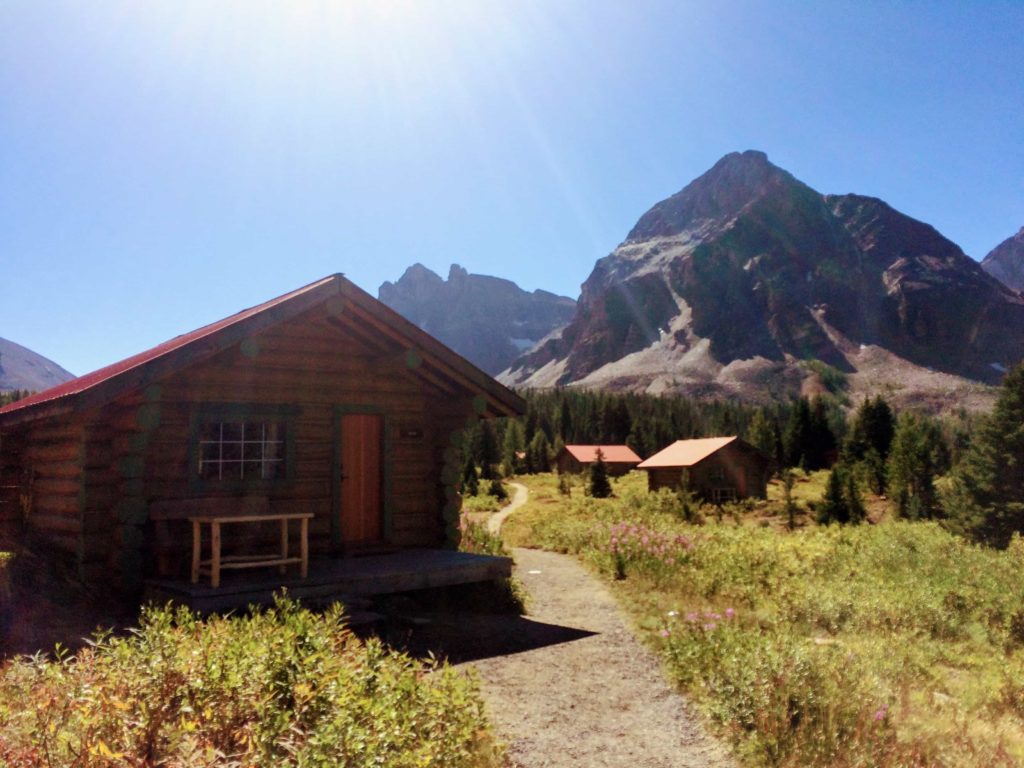 From the Fairmont Banff Springs Hotel, to these little lodges in the shadow of Assinniboine, to the magnificent Abbott Hut situated high above Lake Louise, this area is filled with incredible old buildings put there to host visitors to this spectacular area.  I thoroughly enjoyed Assinniboine Lodge as they opened their doors to hikers from 4-5pm each day for afternoon tea, wine and beer.  Happy hour as it should be done!  Abbott Hut in Abbott Pass was build from the stone that surrounds it, and is Canada’s second highest permanent structure.  The Fairmonts Banff Springs, Chateau Lake Louise and Jasper Park Lodge were all built by Canadian Pacific to host visitors on the railroad as they travelled through, and are much grander and more impressive than the smaller huts dotted around.  I honestly prefer the sanctuary and relaxed nature of the huts, they fit so well in their environment and just feel so homey and accommodating.

I had cut a big hole in my heel prior to arriving at Assinniboine, so the 29km hike out with a heavy backpack seemed like a bad idea.  I opted to helicopter out, whilst the rest of my crew made the long journey by foot.  This left me with 4 hours in the morning, so I decided to go out on a hike!  I’ve done lots of solo hiking in other places, but this was my first venture into the wilderness on my own in Canada.  I’m not going to lie, with all the bear warnings around I was somewhat terrified!  I grabbed my bear spray and hiking poles, strapped up my foot and set off.

I have had an encounter with a bear on the trails before, and it ended well, so I have some idea of what to expect if you run into them.  But it’s different running into one with a group of people than it is running into one on you own… I imagine.  Thankfully I didn’t need to test this theory – either all the bears were elsewhere that morning or my singing the entire Disney catalogue of songs I have stored in my head kept them at bay (lets be honest, it was probably the latter!)  Still, once I found my rhythm (no pun intended) and was making my way back to Assinniboine, I really started to enjoy myself.  It’s so important in this busy world to have time to yourself to organise your thoughts and just be – I can really understand how the pioneering women of the early 1900s found the strength to do it.  It’s the best feeling in the world! 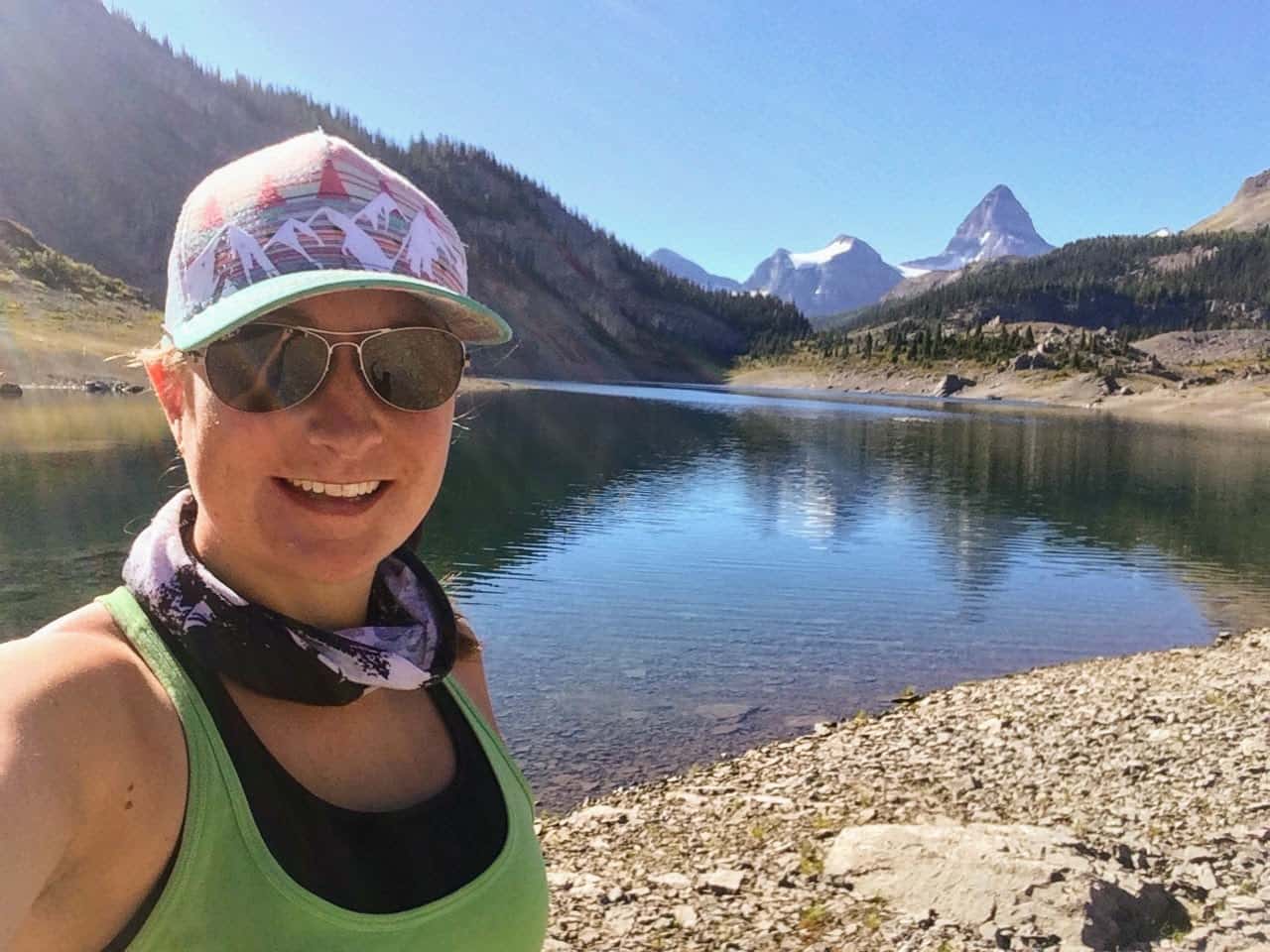